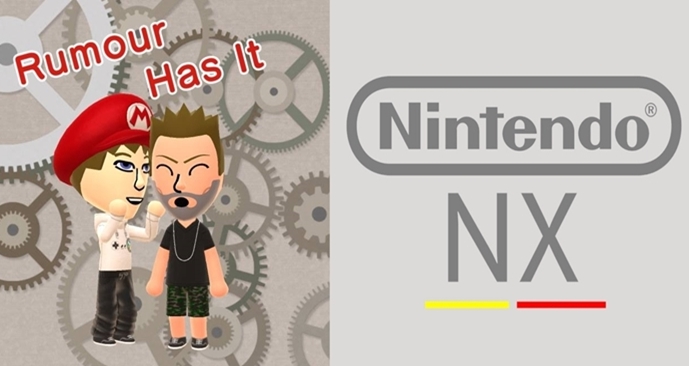 Rumour Has It: New Mario & Pokémon titles Will Release on the NX in 2017

Just when you thought this series might be over, Rumour Has It is back and with more rumours crawling out of the woodwork, it’s only fitting we continue to cover them. If you would stay away from the rumour mill than you will definitely want to click off and read another article, but for those of you who do like rumours, by all means read on.

Last week Eurogamer revealed all kinds of details on just what the NX will be and now sources close to Nintendo have come out to MCV to tell them a whole bunch of things, for starters everything Eurogamer said, is true! So it looks like the NX really will be a portable machine we will be able to plug into our TV and have a breakaway controller. Time and time again I have said a handheld that you can plug into your TV would be a great thing, especially when you can use a separate remote able to connect to the device and now it seems the NX is going to be a console.

As for the graphics, well according to MCV’s sources, the NX will be somewhere between what the PS3 and PS4 and that this console is more focused on targeting smartphone gamers (and possible handheld gamers as well.) However to ensure the console has a wide range of games to entice gamers, Nintendo aren’t pulling their punches as Breath of the Wild will not be the only big first party title we see release on the NX next year as there will be a new Mario game and a new Pokémon game developed by Game Freak, which will release within 6 months of the NX’s release.

Annoyingly as far as the Pokémon game goes, we have no idea whatsoever as to what kind of a game it will be, whether it a port of Sun and Moon to the NX, an NX styled Pokémon Colosseum or even Pokémon Snap 2, but at least we know a little bit more about what the Mario game could be. We already know a “new kind” of Mario game is to be shown at E3 next year, so it very well could turn out that the E3 Mario will be the title we get to see release around September 2017 and even then that’s not all.

Keen to not repeat the mistakes the Wii U and 3DS made when they released with very few good titles to actually play on them, Nintendo aren’t just limiting themselves to first party games, but have secured deals with Square Enix (come on Final Fantasy!) Sega (Project Sonic 2017 already confirmed,) Ubisoft (Just Dance 2017 already confirmed and more games are expected to follow.) They’ve even got Activision and Warner Bros on board as well, so come 2017 when the NX is released, it looks like there will be a lot of third party games to enjoy as well.

Now at this point, we would just like to remind you that all that everything seen above, for all intents and purposes, is “speculation.” So until any of it is confirmed to be true by Nintendo (whenever they finally decide to let us in, or just drunk enough to spill all,) we advise you to only take from this what you will and in no way accept this as solid fact, whilst it is nothing more than rumours and rumblings. That being said, next month is September, the month in which Nintendo are “supposed” to start talking, so maybe, just maybe the answers will start to come then.

Here however things are a little different, because instead of featuring a list of all our previous Rumour Has It articles, instead we’re only providing links to our three latest Rumour Has It pieces, as a way of decluttering the end of this feature. Should you wish to see what else we have in the rumour mill, you can always click here. The choice is yours:

Rumour Has It: More is on the Way for Mario Kart 8