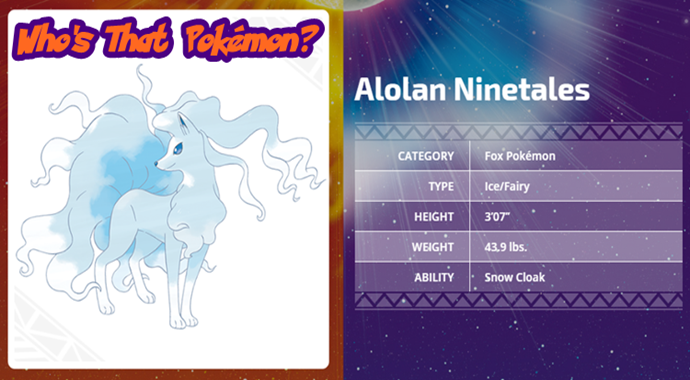 Welcome back to “Who’s That Pokémon?” the feature series regarding the Pokémon we can expect to see in the upcoming games. From Rowlet to Magearna, and Tapu Koko to Mudsdale, we have covered them all, but now that a huge amount of new Pokémon and Alolan versions of Pokémon we’ve already seen before, it’s time for a lot of new additions of Who’s That Pokémon? and in this particular post, it’s all about Alolan Ninetales!

Description: “Alolan Ninetales live on a snowy peak that is revered in the Alola region as a holy mountain. They are treated as sacred emissaries, and people meet them with awe and fear. This Pokémon’s personality is extremely gentle, and at times it has helped humans who seem to be in distress. However, it shows no mercy at all to anyone or anything that dares to damage its territory!

The Alolan Ninetales is able to produce ice crystals from the fur that covers its body. It can use these ice crystals to block attacks, or it can form balls of ice with them, which it fires like bullets at opponents. The power of these ice missiles is great enough to pulverize rock!”