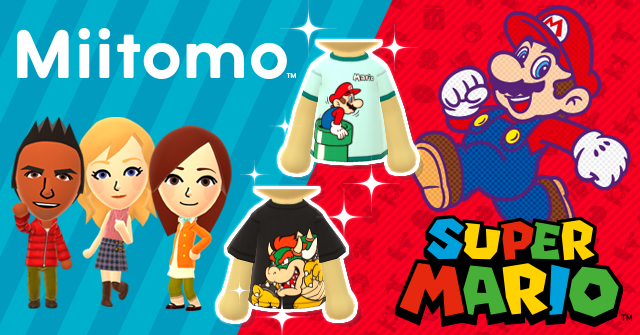 In case you were thinking that Miitomo was starting to get stale again, Nintendo have came up with a new event and bringing Super Mario goodies to the mobile app. Starting from now you can vote for one of four T-shirt designs via Twitter on Nintendo Europe, America & –Miitomo Japan accounts, ideally on the account which covers your region. My Nintendo users will be able to redeem the reward for free once it comes available on the My Nintendo Website.

All four T-shirts will be available via Miitomo Drop so even if the Winning Tee is not your favourite, you can still pick it up at the expense of coins/ Miitomo drop tickets. Voting has begun today (July 22nd) and will end July 29th.

It's our Summer T-shirt Fest poll! My Nintendo users get the winning #Miitomo in-app item! https://t.co/FG4R7t4aYh

That isn’t all though as there are more Super Mario Tees coming to both My Nintendo & Miitomo. With a Super Mario All-Stars Tee which can be redeemed for free and a few others that you can redeem with platinum points which includes designs of Mushrooms, fire flowers and Stars.

Miitomo will also be getting a number of Miitomo Drop stages which will have the Four Tees that are up for voting and also another four with some familiar faces as well.

All of these will become available on July 29th yet as much as I love the look of these T-shirts, I really wish we could get them for real as well using our platinum or gold points. They look far to cool to be restricted to only our Miis and I think Nintendo are missing out on generating some serious revenue which could be made by making these physical rewards that use Gold points to require 😉 (along with the option to convert platinum coins to Gold of course as well). You can check out all this information and more directly from the Miitomo website.