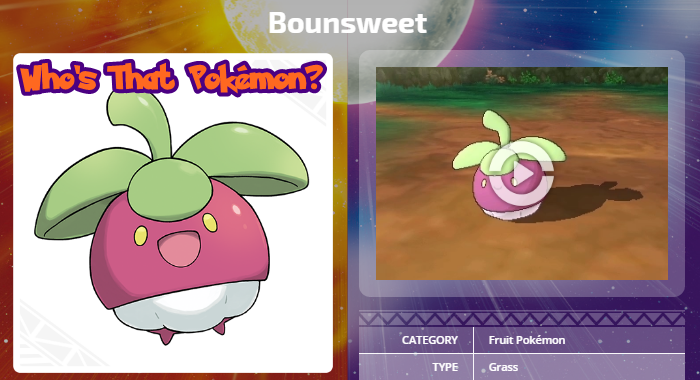 Welcome back to “Who’s That Pokémon?” the feature series regarding the Pokémon we can expect to see in the upcoming games. From Rowlet to Magearna, and Tapu Koko to Salandit, we have covered them all, but now that 6 new Pokémon were just recently revealed, it’s time for some more additions of Who’s That Pokémon? and in this particular post, it’s all about Bounsweet!

Description: “Because it exudes a delicious smell from its entire body, Bounsweet is popular with Pokémon and people of the Alola region. Bounsweet’s scent has a calming effect on humans, so many people let them live inside their homes as a sort of air freshener. Unfortunately, it’s sometimes swallowed whole by Pokémon drawn to its aroma.

When running away from other Pokémon, Bounsweet flees danger by skipping along the ground. Since its bouncy movements don’t convey to others that it’s actually in desperate flight, no one ever comes to its aid.

When attacked by enemies, it drives them off by rotating the calyx on its head. The downside is how dizzy it gets afterward!