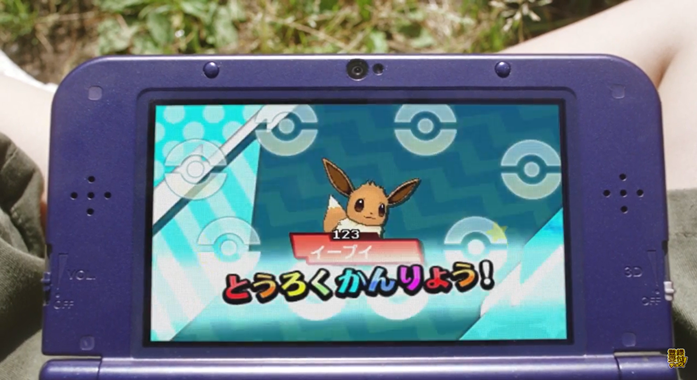 No New Evolutions for Eevee in Sun & Moon

If you are an Eevee fan who has been holding out for a new Eevee evolution with regards to Sun & Moon, then I’m sorry to break it to you, but it appears that is not the case.

In new footage that has come out, a Japanese trailer that shows all manner of things such as trading, exploring riding a multiple Pokémon (Lapras, Sharpedo & Tauros) and performing dance moves that seem to activate the bracelet worn on the trainer’s wrist that will have some sort of a reaction with your chosen starter. But as well as all that just mentioned, it also showed both the newly revealed Mimikkyu & Kiteruguma very, very briefly, and the young protagonist of the trailer, attempting to catch a wild Eevee.

The first attempt failed, but the second worked like a charm and when it registered Eevee to the Pokédex (#123 in the Alola dex,) we can only see 8 possible evolutions and as any Eevee fan knows, Eevee only has 8 forms it can evolve into, since Slyveon’s addition to the family in X&Y. I know for one I wouldn’t have minded seeing a new form after seeing a number of discussions concerning Eevee in a number of Pokémon groups on Facebook, but I’m sorry guys, it looks like we won’t be getting a Steel or Dragon-type evolved form of Eevee anytime soon.

Still there are plenty of other secrets that can be plucked from the new footage, something I’m sure a number of YouTube users will be doing and posting videos of it very soon, but before they get the chance to do it, here’s the footage so you can see it for yourself and who knows, maybe you’ll find something most will overlook: