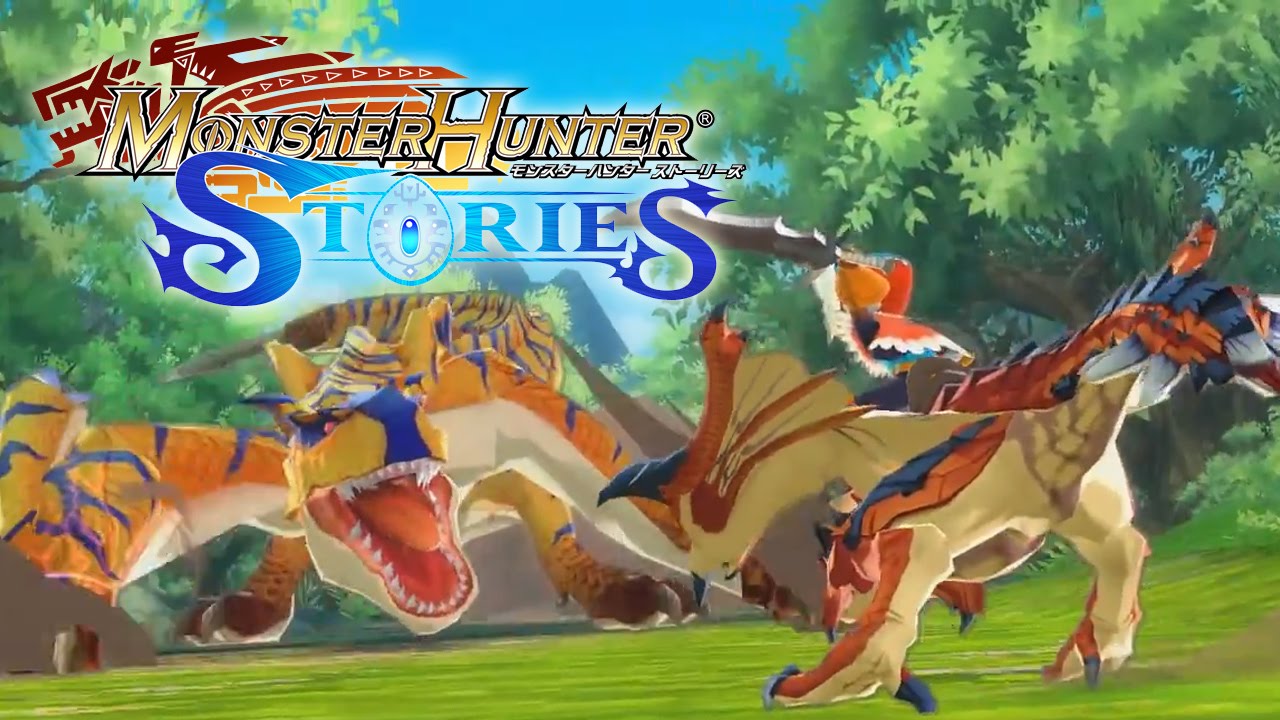 It seems that Capcom are not shy when it comes to spilling the beans on their latest instalment to the Monster Hunter Series; Monster Hunter Stories, which is coming to the Nintendo 3DS in Japan this October. Siliconera have translated the details from the game’s appearance on Capcom TV, which you can read for yourself below:

– Monster Hunter Stories and Monster Hunter share the same world
– Once again, the story involves people who learned to develop bonds with monsters
– Riders never had reason to venture into the hunter’s world until a growing darkness pushes itself into their village
– Game begins as the three friends Lilia (female rider), Shuval (possible rival), and the protagonist head to the mysterious woods to search for Wyvern Eggs
– Lilia mocks Shuval for being a scaredy-cat
– Language used is the same as other Monster Hunter games
– Tsujimoto joked that the voice actors understand the language and they even own a dictionary detailing the Monster Hunter lexicon
– Customize your character when the group finds an egg
– Lilia mentions that you have to introduce yourself to the soon-to-by Myvern before it hatches
– Customize your facial expression, mouth, hair, eyes, eye/hair color, skin tone, and voice
– Voice 1 is the voice actor from the game’s accompanying anime
– A baby Rathalos hatches from the egg
– It then lunges at Shuval, but instead nuzzles with the main character
– Next your return to the village
– Dan gives a stern lecture
– Dan: the riders’ overseer of sorts
– See the village elder, who reconsiders punishment after discovering you’ve made a bond with a Myvern
– A village horn sounds to signal that a monster is attacking
– A Nargacuga attacks the rider village, crushing Shuval’s home and supposedly killing his mother
– The Rathalos comes to your aid, but it takes a strong hit from Nargacuga’s tail
– The hit scars Rathalos’ left eye, and it tumbles off the cliff into the darkness below
– Nargacuga leaves
– A darkness awakens in Shuval as he grips his mother’s treasured mirror and vows to stop this evil
– World map features a number of villages, including ones situated in snowy mountains (Talju Heights), a desert (Kuba Desert), a volcano range (Twin Peaks), the coast, and a mysterious island called Naobaku Island

– Another part of the footage is from the snowy mountain area Talju Heights
– Monster Caves can be found on the overworld
– Caves vary in rarity (ex: grey are average, gold are rare)
– Better tether genes and stats for rarity
– Need certain monsters to reach some of the caves
– Ex: Qurupeco can’t swim, so switch to Lagiacrus to cross a freezing lake
– Carry six monsters
– Switch monsters at any point by pressing a button on the touch screen
– Each Monster fills a unique niche
– Lagiacrus can swim, but it can also roar to scare small monsters off so you don’t have to fight them in Monster Caves if you’re short on time
– At one point during the gameplay session, they’re at a Khezu’s nest
– Each egg has a different pattern on it that should make it easy to see what monster it will be
– Can re-gather eggs as long as the monster is asleep
– Footage shows that they manage to exchange their egg four times
– On the fourth draw, they are too slow and are ultimately caught by Khezu, initiating a battle
– Hunting Horn: using Power, Speed, and Technique attacks will earn you a note of that color
– After completing a song, the player will auto-play the buff/de-buff after the final attack (sort of like a free hit)
– Tether gene system is like a Bingo Board
– Align three of any color to awaken an ability in a Myvern
– Line up three of the same color to make it more powerful and possibly change its appearance (black Zinogre, red Lagombi, etc.)
– Myverns can inherit tether genes when brought to Denji
– Denji: an old man in the rider village
– Gain many abilities this way

– Home village included like in regular Monster Hunter games
– Switch your armor and Nabiru’s outfit from the item chest
– Outfit changes only impact your appearance
– Change your hair, hair color, and eye color from the box at any point
– Can choose to have your armor’s helmet off during a cut-scenes
– View cut-scenes from the item box
– Pre-order to get a Rathalos outfit for Nabiru
– Monster Hunter Generations save data will land you a Glavenus outfit for Nabiru, and a Glavenus weapon (sword and shield) for your main character

– Battle with friends locally or online
– Bring items, armor, and the Myverns you’ve raised into the battle
– Zinogre battle theme
– Communication system: use stickers of Nabiru with various messages
– Players have 3 hearts
– A heart is taken away every time a monster or player faints
– After a monster faints, it will reappear on the battlefield with full health and you can use it again
– Earn egg shards through battles
– The winner receives more shards
– Loser gets some as well
– Collect shards to put together eggs and collect new Myverns
· The Boy and Girl Monster Rider amiibo will cost 1800 yen
– The Nabiru amiibo will cost just 1200 yen
– Diorama scene for the Monster Hunter Stories amiibo will be 1,500 yen