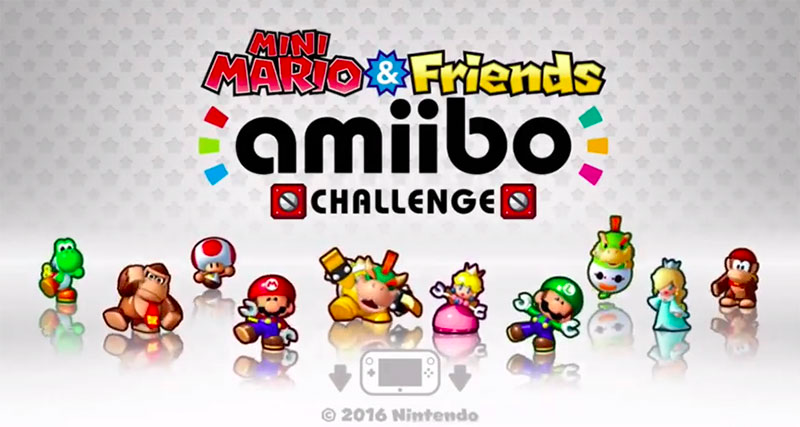 Good news for Nintendo & Amiibo fans in the UK & Europe who love Super Mario and like getting free games, Mini Mario & Friends amiibo Challenge will be available to download for free in both the Wii U & 3Ds eShop whereas in the US, they already had ‘Early Access’ to the game when they buy an amiibo between March 25th  and April 27th. With the same aesthetic as the Mario vs Donkey Kong series, yet you will be able to play as both Mario & Donkey Kong in mini robot form but you will also be able to play as other Super Mario Characters as well. The only catch is that you will have to have that particular amiibo to play as that character (including Mario I believe) however, you can use any amiibo to plays as a toy robot in the game as well. So even though the other Nintendo characters don’t get a cameo role in the game like in Super Mario Maker or Yoshi’s Woolly World, you can still use them to play the game.

The game is relatively simple, you have to guide your character across the level whilst avoiding hazards and overcoming obstacles. Each Super Mario or Donkey Kong Character has special abilities to help them overcome some of these obstacles and hazards. Mario has his Wall Jumping ability, Bowser Jr can ride over spikes, Princess Peach has her Parasol and so on. For those of you that are on the fence about this game. It is FREE so it doesn’t cost you anything to try it except maybe time, download memory, and of course, purchasing amiibos if you don’t have any but other than that, why not? Are you thinking about picking this game up? Let us know in the comments below