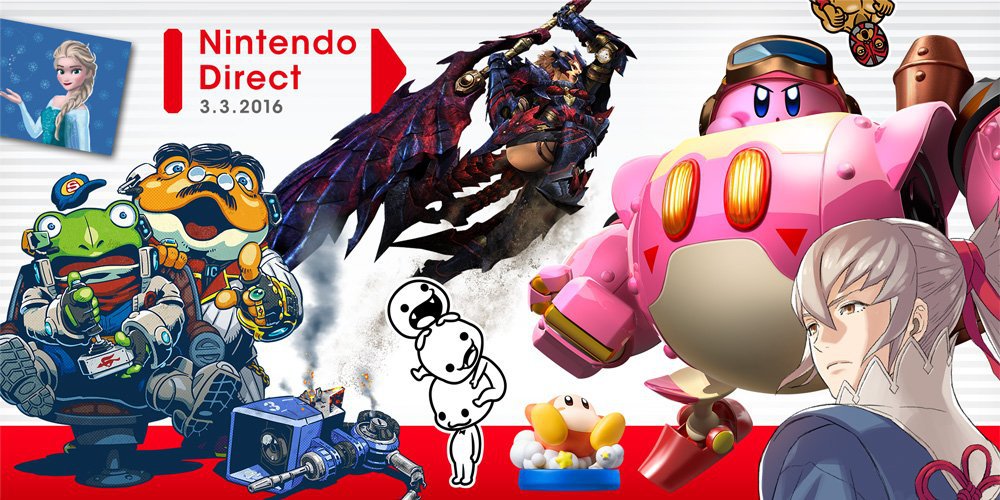 Wow, What a Nintendo Direct indeed. Though to start off, other than a few extra details on Hyrule Warriors, there was no other Zelda information and nothing at all on Zelda U. There was however details revealed on  Mario & Sonic Rio Olympics 2016, Paper Mario will be coming to Wii U and there are more “Tool” updates for Super Mario Maker. Here is our Highlights of the Nintendo Direct. Please bear in mind, this is for Europe!

Well to kick off, we start with Star Fox Zero. The worlds are the same with a brand new layouts. There are also alternate routes with their own bosses. The game also includes Teleporters and there is a new stage called Fortuna which is full of bio weapons. There is a two player co-op mode where one player pilots the ship and the other mans the cannons. The Fox amiibo will unlock the original 16-bit SNES Arwing. Another game launching alongside Star Fox Zero is Star Fox Guard and will also be available for download from April 22nd or a special first print physical copy of this game will be available in a twin game bundle with StarFox Zero.

A new software update is coming to Splatoon on March 9th. A software update which will improve certain gear abilities, make adjustments to Ranked Battle Matchmaking and will also be adding new elements to Splatfests. Sheldon will also be recommending new weapons with combos and his first “Sheldon’s Picks” Weapon Set Recommendations volume 1 & 2 is due out in April.

The Wii U version of Mario & Sonic At Rio Olympic games 2016 will be coming out on June 24th.

Super Mario Maker will be getting a new update on March 9th which will add new tools/elements (At Last!). New tools such as;

Key (Shake P-switch until it changes).

Key Door (Shake Door until it changes to P-switch door and then shake again).

Key can be hidden on bosses to make defeating them more of an objective.

Pink Coins which can change to a key if you have collected them all (shake coin).

The 100 Mario Challenge will be making a comeback with a vengeance in “Super Expert Mode” which will have a lot more costumes to unlock and has another chance in turning our hair grey. Among the new costumes is Tetra the Pirate, from The Wind Waker. There will also be some changes to the Super Mario Maker Bookmark Website.

Tokyo Mirage Sessions known as Shin Megami Tensei X Fire Emblem in Japan will be coming to Europe June 24th. The game will be maintaining it Japanese origin by keeping all the original voice work but will include English subtitles.

It seems that the rumours of Paper Mario coming to the Wii U a couple weeks back were true as it has been announced that Paper Mario Colour Splash as it will be called will be gracing us this summer. The story to this game is that Colour is being drained from the world and Mario has to stop it and bring colour back to the world with his paint hammer.

No real update on My Nintendo that wasn’t already confirmed before. in case you didn’t know anything about My Nintendo, it will give you the opportunity to play apps, Purchase Digital games and earn points including platinum points and gold points. If you do it in the pre-launch month you will be able to download Flipnote Studio 3D on the 3DS for free.

As we know, Hyrule warriors 3DS will be available on March 24th. It will also come with a promo code to download the new characters (Tetra, Skull Kid, Red Lions, Linkle & Toon Link) to Wii U. There will be a season pass for 4 new DLC packs and a new costume for Ganondorf in the form of Toon Ganondorf (providing you get the Season Pass). Medli from the Wind Waker will also become a playable character and will be available soon for both 3DS & Wii U.

For anyone interested, Yo-Kai Watch will be coming to Europe on April 29th and if you would like to see for yourself what the game has to offer, there is a demo now available on the 3DS eShop.

We will also be blessed with Disney Art Academy on the 3DS. It will help you draw famous Disney characters and includes 80 characters from Mickey Mouse to Frozen. It becomes available July 15th.

The controversial title that is Metroid Prime Federation Force will be coming this summer to 3DS. It centers around the war of the Galatic Federation & the Space Pirates. Because the game is created with Multiplayer in mind. Samus Aran is not a playable character in the game. It uses the RPG mechanic in which players will have to earn experience to upgrade their stats and weapons. They will also be able to choose their own roles like a healer or warrior.

Here is a list of some of the games that will be available to download this year at some point on the 3DS, Wii U or both;

SNES games coming to the 3DS virtual console. If you buy one title upon release you can get the other half price. Titles include; Super Mario World, Mario Kart and A Link To The Past

Azure Striker Gunvolt 2 available this Summer. The original (Azure Gunvolt) will be available for 33% off for a set period.

Fire Emblem Fates, Birthrigh, Conquest & Revelation Special Edition will come with a steelbook case and doublesided poster as well and will be available from May 20th. There will also be able to download Revelation Separately from the 3DS eShop on June 9th.

Dragon Quest VII is being remade for the 3DS and will launch later this year.

Rhythm Paradise Megamix will be coming out this year as well.

Kirby is also coming to the 3DS!  Kirby Planet Robobot comes with yet another mechanic to take over mechanical armor suits that can also copy abilities. It also comes with a game mode called Team Kirby Clash in which 4 players can work together to defeat bosses and also uses the RPG mechanic (gain experience, upgrade stats, etc.). There will also be 4 new Kirby Amiibo to collect including, Kirby, Metaknight, King Dededee and Waddle dee.

That is all and what a lot of information to digest. I almost had a meltdown trying to watch the direct and write this post at the same time. Well guys & girls, it is that time where we have to love and leave you but be sure to leave your thoughts and comments below.