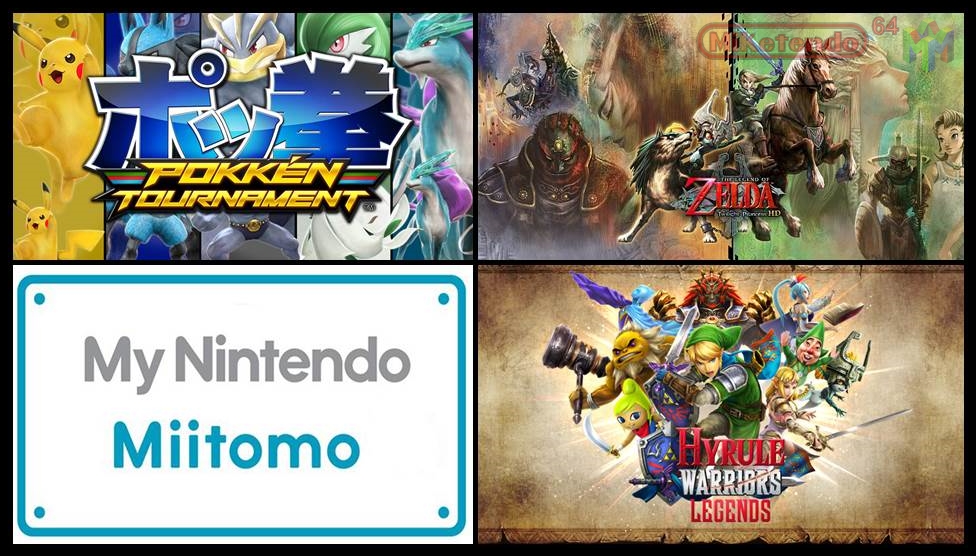 Well Guys & Girls, March is finally upon us and it brings us some much needed new software to keep our Game going! It is true that they are all ports/remakes/remasters of original games with the Wii U or 3DS title slapped onto them, Twilight Princess was on Gamecube & Wii and now it is been HD remastered for Wii U. Pokken Tournament was an Arcade game in Japan that has now been ported to the Wii U and Hyrule Warriors Legends is a remake of the Wii U version, graphically streamlined with extra characters and an added story to boot for the 3DS. That said Pokken Tournament is a highly welcome contender as it has not really seen a launch outside of Japan and quite well received by fans of Pokemon and Nintendo in general.

Hyrule Warriors Legends has got fan interest going as let’s face it, a huge percentage of Nintendo Fans who have bought the latest generation of hardware are 3DS owners and have not bought a Wii U just to play Hyrule Warriors. Legends on the other hand is a ported version of the Hyrule Warriors for the 3DS and will probably be more accepted than its Wii U cousin. The inclusion of Skull Kid, Tetra the pirate, The King of Red Lions King Daphynnes himself and new character Linkle has added to the appeal of the game more so. I can see more people putting down their gamepads and buying 3DS’ than the amount of people that discarded their 3DS’ to buy a Wii U for the original release on the Wii U.

That leaves us with Twilight Princess HD. There is a lot of mixed feelings with this game. It is great to have a 3D remaster of this fantastic game. The storylines is one of my favourite yet, second only to Ocarina Of Time which was my first Zelda game. The other side of the spectrum sees this as a nicotine patch for Zelda fans to soften the blow that Zelda U is just not ready yet and with no real news to go on or a teaser trailer to keep us hyped for the next installment, this is Nintendo’s way of saying ‘While you wait for dinner to be ready, have a little snack first.’ There is a huge debate that the so-called “HD Remaster” fails to appeal to fans as it has made the graphics softer and not sharper. The colour of the game more faded. That the Dolphin Emulator has done a better HD render than the Official Nintendo version. You can already play the Wii version on the Wii U and the list goes on. It does have little extras to add to its appeal though. If you have already completed the game before, you can start of in the Master Quest (hard mode).

It has amiibo functionality with the Legend Of Zelda (Smash Bros series) amiibos. Both Link and Toon Link give you arrows, Zelda and Sheik give you hearts and the Ganondorf amiibo can make your game even harder by allowing you to take double damage (you will really have to up your game for that one). The icing on the cake though is the New Wolf Link Amiibo which is included in the Twilight Princess HD bundle and will also be available separately. This new amiibo will give you access to the Cave Of Shadowsand will reward you with a huge wallet that will let you hold even more rupees than you could in the previous version if you can beat all 50 rooms of course in only wolf form. I myself have already ordered myself the bundle and can not wait for it to be mine this friday. If you haven’t ordered yours yet, what’s stopping you?

An entirely new concept (well, not really) will also be coming to us this month in the form of Rewards Program My Nintendo and Miitomo. The rewards program My Nintendo does exactly what it says, it rewards you with gifts like Download codes, Merchandise and the like for not just buying games but playing them as well. I am particularly interested in this scheme as I missed out on Club Nintendo when it was available and I am hoping to make up for it with My Nintendo. Miitomo is Nintendo’s answer to the Social Network. It portrays you as your Mii and will in a way connect your Game’s console to your Smart phone. It will also include some form of entertainment that you can join in with your friends and family.

Are you looking forward to this month’s Jamboree? Is there anything you are particularly hoping to see be released this month. Be sure to let us know in the comments section below.