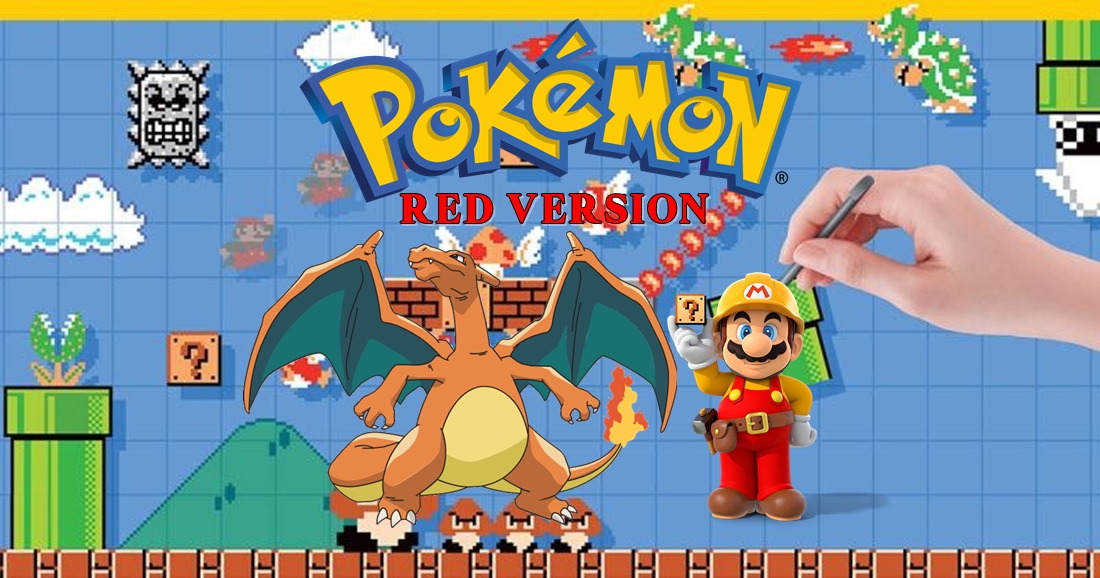 With Gen 7 Pokémon Sun and Moon officially confirmed to be on their way to us in the Holiday Season, what better way to get into the adventuring mode than to play both the original Gen 1 games and the second Season of our Super Mario Maker PokemonRed series.

Having covered Season 1 in our last feature, this one is all about Season 2, so first let’s start with the differences between the two. Season 2 possesses two additional episodes, which now have more detailed level layouts, including details added to really make the cave locations pop. Season 2 also introduces a new reoccurring character in the form of Rosy, the Pokémon Day-care woman, aka Rosalina and she knows just as much about the new Pokémon world as Professor Shroom does.

Professor Shroom now has a newly revised lab, a much upgraded and larger version than the one we get to briefly see in Ep4: Spiny Forest and like any good lab, it comes with its own reading materials. Lurking in the bookcases are comments regarding Shroom’s research notes, which change with every episode and clues you in to his current projects and more.  Also because of his popularity, Professor Shroom now makes regular appearances and his own extra special levels, which includes him conducting a field test.

Then, just like Season 1, there are two more available Gym Badges, but also new level settings as players can now take to underwater locations, but because more two Gym’s isn’t enough, there’s also a Brawler’s Club you can visit to get your very own Mankey and take on the Fighting-type Machokes. Victory guarantees you the Bronze Fist, but getting to the secret Dojo is no small task. There is also the inclusion of Mega-Star evolving for Pikachu and a couple more “Pokemon Purple” episodes to continue Mewtwo’s story.

Now if you have happened to miss our feature piece on Season 1, not to worry because this link will take you straight to it:

But should you wish to continue reading, below is a quick list of previously revealed Pokémon who made it into the series and a couple of spoilers for future episodes and this time there are 40 names on the list:

Season 1 may have set the premise and initial story, but Season 2 has truly taken the story and developed it more so and truly brought the Super Mario Maker series to life and with that in mind, below you can find all the details for the complete Season 2.

To show just how much different Season 2 is compared to one, the first episode opens with our Pokémon trainer having made it to Rosy’s Day-Care, where Rosalina is all too eager to introduce us to her many friends and allows you to play with them all. Do a good job and she might even let you keep one.

Given the attack on his lab in Season 1, Professor Shroom has taken to hiding out in his secret underground lab, where he’s asked you to visit him. With a new Poké Ball developed, new containment facilities and plenty of reading material, the lab is certainly worth the visit.

In the second “PokemonPurple mini-episode,” the story continues after Mewtwo’s victory against Dragonite but the battle has taken its toll on Mewtwo and now the Psychic Pokémon is injured. His only hope is an explorer who happened to be exploring the cavern Mewtwo sought shelter in.

PokemonRed Ep13: Back to Dry Dry:

Following the Professor’s advice, our hero returns to Dry Dry Caves, where a new route is accessible and a secret Brawler’s Club awaits. Victory promises total ownership of a Mankey and the right to lay claim to the Bronze Fist, but before you can even undertake the Dojo’s challenge, first you have to find it.

With the Dojo beaten and the route to the secret Pokémon Gym discovered, it is time to call upon your friends and see if you have got what it takes to beat the Dry Dry Gym and earn yourself the Rubble Badge.

In order for you to even reach the underwater Gym of Rio Cheep Cheep, you’ll need to acquire Dive Equipment and with none already available, Professor Shroom has been hard at work developing it and now he is ready to commence his final field test. It should be a very simple swim provided he doesn’t get too distracted by the sights.

Finally out of Dry Dry Cavern, our hero finds himself back in Bom-omb Town, but all is not well for Team Bowser are on the scene and laying waste to the entire Town. Desperate to locate Professor Shroom and Mewtwo, Team Bowser will leave no stone unturned. They’ve become so desperate that they’ve even got a Tie-Fighter to help them destroy Bom-omb, but there is nothing you can do to stop the attack, so just flea and hopefully you’ll make it safely to the other side.

Worried about Rosy’s safety, you’ve been asked to check in on her and her Pokémon, but when you get there it is not destruction you find, but the entire location has been remodelled as Rosy’s made a number of changes and started to grow flowers again. Safe Protected from the outside danger, you may as well spend the time getting to play with some more of her Pokémon.

In the third PokemonPurple episode, Mewtwo is still gravely injured as Professor Shroom is doing his best to get the Pokémon back to his lab but trouble follows. Desiring revenge, the Dragonite from before gives chases and it will take a miracle to elude the wrathful Pokémon and a miracle is exactly what will happen, for Mewtwo is not going down without a fight.

With the Dive Equipment ready, it’s time to head back to the secret lab and take it out for a swim, whilst also getting a very special gift, a Mega-Star for your Pikachu, the time for Mega evolving has come and the path to Cheep Cheep Gym is open.

With the Series Finale now here, our hero has made it to Rio Cheep Cheep, home to hundreds of Water-type Pokémon and the Water-type Gym. In what will be one of the hardest Gym’s to date, it’s time to turn the tide and show off just how far your Pikachu has come. The Froth Badge awaits and with it, a new friend in the form of Squirtle, but just because the Season ends here, the adventure does not.

Season 2 really raised the bar as far as this series is concerned, but it also showed just how far the series can grow with every new Season and Season 3 has some very special storylines and levels set in motion, so if you’ve become a fan of the series, you’re not going to want to miss it because Dragonite will be making a return and it will be Charizard who will face him and whilst the first episode of Season 3 isn’t out yet, we have got two special promo episodes out, celebrating both the series and #Pokémon20. You can find details on both courses below:

Pokemon continues to give, so it only felt fitting to give back to such an amazing series with a level created out of love and our way of saying thanks and happy anniversary!

A quick an easy level more about design rather than gameplay, which was released prior to the Season 2 Finale as thanks to all those who continue to play and star the episodes, whilst also showing some Charizard love.

And this concludes the complete low-down on PokemonRed, but the Pokémon adventure doesn’t end here because this week alone we still have Pokémon Day and the release of the original Gen I games on the 3DS. 2016 truly is the year of Pokémon because the distributions and new titles just keep coming.