With attention elsewhere, let’s turn it back to that build your own levels game that recently reached over 3 million levels made and recently received an all new update that just made the game a whole lot better. We are of course talking about Super Mario Maker. 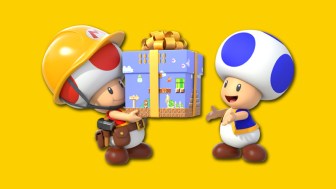 From easter eggs featuring doors that knock back when you knock on them, to doors that have a creepy, slender Mario popping his head out to a harder gnat game, the Mario fun is far from over and Expert mode has recently become that little bit easier now that checkpoint flags have been brought in. The amount of times those flags have saved my arse, helping me to not have to go through the first part of a nightmare course, all over again, and on the subject of 100 Mario Challenge, gone are the long wait times in between levels and starting a new game. YES!

However my favourite additions to the game has to be the Official Maker levels, some are yes, quite hard, but the others are just brilliant, but nowhere near as great as the Event Courses. When I first saw Tri Force Heroes there, I was like “hell yeah,” and then I played it and saw the Totem Link costume and I just had to have it and have it I did as I was able to unlock it, along with Arino Kacho amiibo costume. For me the Event courses are a winner and the Tri Force Heroes one feels the most justified to be there, but the event courses keep coming and so do the unlockable costumes. On November 6th came Super Mario Kun and then on the 10th we got not one, but two fantastic all new event courses, with both a Cat Mario and Cat Peach amiibo costumes up for grabs.

Fun fact – There are two ways to do the Cat Peach level, well three, hard, harder and dead easy, I stumbled on the latter and it totally paid off. Trust the coin and keep hold of the power-up is all I’m saying on this matter.

Either way, Event courses are off to a great start and I hope it has a great run and the new unlockable amiibo costumes are a welcomed bonus, but we can’t deny it does leave one to wonder just what amiibo could be next and in what aspect? Only one way to find out, to keep on playing this all new game mode, something I will most definitely be doing.

As for the future of this game, gamers the world over are holding out for DLC that will give us a whole range of new items and levels to try our hand at and who knows, maybe the game will get a port to Nintendo’s 3DS, it’s not like course making hasn’t been done on it already, because in the 3DS and Wii U version of Mario vs Donkey Kong: Tipping Stars you can do just that and even if they did skip the whole making levels skit for a 3DS version, they could still make a game where you could play the levels made with Super Mario Maker. It’s food for thought at least.