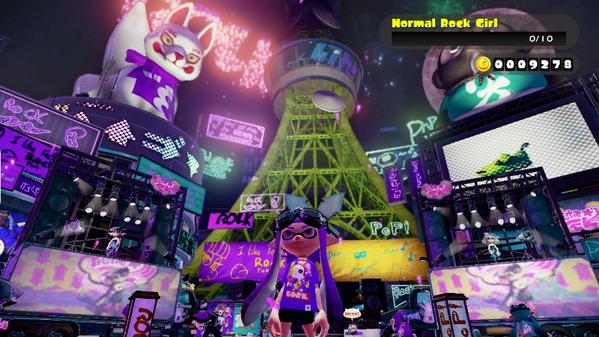 It’s here and as the party is ready to kick off in the good old US of A, for Independence day, fireworks to be soaring into the sky above, the party has kicked off in Europe and Northern America as Splatfest is here. We haven’t got fireworks but we do have inkstrikes raining down upon us in the Turf War Splatfest battles, with three playable stages and all sorts of ranks to be obtained via a good old point system. (Got to rack up those points). Been playing it for an hour and it is God damn Splattergeddon I tell you.

Still, I got a brand new spiffing Splatfest tee, so that’s pretty awesome, except for the fact that I like totes got to hand it in once the event is over, which is a total buzzkill (wonder if I could just hide it so they can’t take it from me. Nah that would never work). Now I would just like to take this moment to shout out to my awesome, Team Rock! That’s right I’m a Euro gamer, and of course I picked Rock over pop, rock is awesome, just like ordinary Turf War, running around, shooting your colourful load all over the course, what’s not to enjoy about that and of course occasionally killing anyone on the opposite team, but it’s a lot more fun because now it’s a pure competition and time to totally own, which I so am. (Look for by my name, I’m the level 8 Jack you see killing everyone with his ordinary Splat roller).

And just like ordinary Turf War, the team who inks the most turf wins and the points and coin you win, reflects this, as although Spatoon is indeed a shooter game, one of Nintendo’s best, being the Inkling who scores the most headshots, or covert splats, or subweapon kills, doesn’t really matter, except to the gamer who just loves to kill everybody and come on, be honest, it is a big part of the fun. I mean you see this large area of the oppositions paint, you shoot it up, you notice movement to your left, you turn, you spot an Inkling in squid form, of course you’re going to open fire, that’s just common sense. Mind you, if you’re an arse like me than normal battle, ranked battle, or Splatfeast, you’re all about the killing and pitch up camp at your enemies base, waiting for the dead players to respawn, just so you can mow them back down with the roller.

But hey, Nintendo really hit the mark with Splatfest and they have made up for it since the delay two weeks past and sure there have been some glitches on my side of the world but it’s all good and this is just the start of greater things to come, such as more updates, especially a bigger one in August. Furthermore Nintendo really hit the mark with the online side of the game, which in all honesty is what makes this game the game it is, outshining both story-mode and Battle Dojos and with that, it’s time I raised my Super Rocky Boy rank to the next level. Splatoon Europe, I’m ready for round 2.